In Topic: UFC on ESPN+ 26 Felder vs Hooker Pick'em Thread

Yeah right, there will be no nudity at all other than maybe a couple of arse pics. Any simps who get scammed by it deserve to be

Hey guys, figured I'd drop in and talk about some things. This last couple weeks have been real rough for me, the last one being exceptionally stressful and testing. I haven't had a lot of time to myself and have spent what little time I did have resting or wallowing. But we're on to better things now, and I'm excited to get back into the swing of it

Firstly, I'd like to give congratulations to Sameh Mahmoud and Hugh Honey for their emphatic victories this weekend, both dominating the reigning Champions and securing the crown for themselves. They now join the likes of Chamuaknoi Sitsongrit, Arthur Menezes & Orpheus Boagrius as the kings of their respective divisions. Well done boys. Secondly, our next event will mark a very important step in the development of our promotion as we make our first move into PPV territory. TR11: BOAGRIUS VS. GARCON will be live on PPV as we are set to witness the return of the Spartan behemoth Orpheus Boagrius as he looks to defend his throne from the always dangerous CEC veteran, Jean Paul Garcon. In the co-main event, top welterweights collide as former Konflikt and DKCW Middleweight Champion Buddy Barnett meets the former EMP and ABW title-holder, Wilson Brooks. The third fight available live direct to your living room will see the crowning of our inaugural 205 Champion as the streaking striking sensation Wallace Cobb looks to retire the always dangerous Dutch kickboxing legend, John Brophy.

We are very excited to be experimenting with PPV events and will put our best efforts forward in securing and building the talents required to cement our place at the top of the world of Mixed Martial Arts. Just yesterday we managed to put pen to paper with #28 P4P ranked Budokai Fighting Federation Hall of Famer Ross Kemp as he joins our already exciting Heavyweight division. A fighter I know and love all too well, we can't wait for Ross to make his promotional debut. Additionally, and finally, talks are in place for the aforementioned TOKYO REBELS Welterweight Champion Sameh Mahmoud to return to SYN and take on their Lightweight Champion Elgin Turner in what would be TOKYO REBELS' first official cross-promotional superfight! The first of many I am sure.

In Topic: UFC on ESPN+ 25 Anderson vs Blachowicz 2 Pick'em Thread 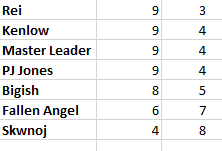 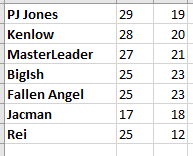 Lmao I really missed a fight? One I bet on the winner too, fuck. Good night for most pockets though, damn

In Topic: UFC on ESPN+ 25 Anderson vs Blachowicz 2 Pick'em Thread