Definitely a cool concept, might be kind of hard to build hype with fighters only being eligible for the org for about 6 months. Plus, since most top managers prefer an average of 3 months or so before they fight, on top of wanting about 30 days between fights, seems like a lot of guys would only get 1-2 fights before theyre 20. Mentor had a good idea, would be a good feeder org. Along with what Barney said, CWC has been groovy so id definitely sign a guy or two

Not really super concerned about building hype or being an associated feeder org.

My plan is as follows:

-Not having any champions (so no stripping the champ hype loss)

-Once a fighter turns 20, they'll be free to go wherever they please

I just wanted to do something a little different from the norm just for fun. Hopefully if my plan comes together, it'll be a consistent starting/low tier org that people will be familiar with much like when you think of high tier you think of GAMMA, PULSE, CEC (RIP), ICS, & SYN.

Thank you everyone for the feedback & interest, look forward to it somewhere in the near future!

Knowing your history of "pairing them up properly" I wouldn't trust this idea until I see it working.

Yeah but as long as you pair them up properly it shouldn't be an issue & worse case it just get's declined with no harm done.

With the new company slot I had an idea for a neat little gimmick org: teenage fighters only (16-19). Real low contracts as I expect to go negative not being able to generate decent hype for events. When a fighter turns 20 I'll cut em loose. No champions will be crowned to avoid the hype loss when they inevitably get cut. Maybe people would be more inclined to put their projects out early if they knew they were fighting others of a similar age/id. Also, perfect for test fights.

What do ya'll think of this idea?

P.S. It's unfortunately going to have to wait until I can afford to buy VIP in bulk. I've got about 98 days & I don't want to blow through them before i'm able to get some more. I do have $750k for 3 months on the VIP exchange for anyone willing to help out though.

Hello everyone!
John & I want to thank everyone's participation in making the Catch Wrestling Championship the go to org for Grappling in MMATycoon & we also appreciate the positive response we've gotten from the community so far!
Some of you may not know but running a Grappling org, let alone a successful one, works slightly different & is uncharted territory for just about everyone in this game. We want to give a big shout out to all the managers who've worked with us since day 1 while we worked out the kinks. With all that being said we want to let everyone know about our new pay / contract structure:
No Grappling Hype: 3k / 3k / 3k
Grappling Hype (low): 4k / 4k / 4k
Top 10 in Grappling: 5k / 5k / 5k
Former Champion (still top 10): 6k / 6k / 6k
Champion: 7k / 7k / 7k
Just like in real life, MMA pays much more than Grappling competitions & it's true in game as well. We've broken the threshold of breaking even albeit by not the greatest of margins. Hopefully, as the org continues to grow, all of these numbers will too.
We are also scaling the amount of fights on the contract offers from 8 to 5. We initially thought we'd be able to book everyone at least 2 matches a month (& for the most part we have) but we think seeing that number is scaring off some managers from joining.
I'll sign off with a few key reminders:
-Energy is not lost during a grappling match
-135 lb - 265 lb divisions are Open ID
-265+ division is Openweight 350K+
-The org is perfect for older fighters declining in skill
-If you have a Wrestling / BJJ heavy fighter that just can't hang in the higher/mid tier orgs, give us a shot!
-Due to the no energy loss, the org is great for the "Sparbots" on your roster who are just sitting around. You can have them still compete, earn a little scratch, all with no downside!
-We are the perfect place to have your 350k+ fighter compete injury & energy loss free all while developing their stand up skills for MMA/KT or move on to our unrestricted divisions!
Thanks again everyone!

Proud to say I've got 2 title fights on this card! Good luck to everyone including my opponents, lets go out with a bang!

With Patrick Seery going awol and currently a Free Agent, we will either need to fill his slot with another fighter or discuss with whoever picks him up

But for now, the bracket is as follows: 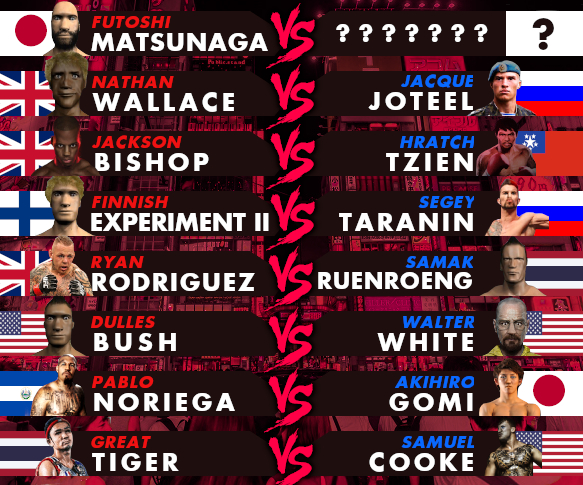 I love it when I have a fighter on a really cool graphic like this, stoked!

I made a fighter build specifically to do kneebars/heel hooks/ankle locks, Kazuma Kuwabara. Out of 10 subs so far, only 1 of them has been a leglock. I set his stick position to top guard & 100% sub. Even with maximizing the opportunity for leg locks it still has been low. Is it optimal, no, but it's fun to spice things up a bit from the normal type of builds.

Not sure if you are someone who sticks to the ID ranges, but since 360k is taking forever to get here I know personally i’ve brainstormed a ton for characters, but i look forward to seeing what you have planned for 360.

I don't get to make new fighters often because it's extremely rare that I release fighters & I've maxed out my 20 fighter slots. However, I'll be releasing 2 of my very first fighters after they finish their contracts very soon so I'll have room to make some new guys

Bitter sweet though, I've had these guys since 2015

On a less egotistical note, Buff Minion has the best in my opinion. Billy A has some hilarious ones as well.

As for other managers and their fighters - I've always been impressed by Billy Arseworth's biographies, Rastaman's (RIP) avatars & Buff Minion's EVERYTHING. Players like these guys and anyone else that puts the effort in really do make the game worth playing. I don't think I'd stick around if everything was default everywhere I looked.

Glad to see a lot of people enjoy this aspect of the game like i do! If this was just a numbers game I would have left a long time ago.

When I have a character concept I try to do my best to do a little homework first. Without getting long-winded & to give an example, When i made Jacques Durand the character concept was the son of African immigrants who moved to France so i googled what city most African immigrants moved to in France. After that I googled rappers from that city to put as his walkout music. Just simple stuff like that doesn't take that much effort I think livens up a character concept & brings them to life a little bit. Sometimes I try to go the extra mile like with Seamus MacNamara & when he does his smack talk on Buzz I type out what I want to say & pick out words I can "Irish up" based on a couple websites I found for Irish slang & pronunciations.

As soon as the last one is signed, the bracket will be devised, posted and match-ups sent out. I can't wait to kick this off!

After the TWGC comes to a close, come on over to Catch Wrestling Championship if you're looking to do some grappling. We're always looking for more talent!